While gender is discussed in the media often in relation to sexism, restroom accessibility, workplace rights, and the like, it is very seldom discussed with students in the context of a learning environment before the university level of study (if at all). These leaves students on their own in terms of navigating their personal gender expressions and hence vulnerable to matching the social expectations of the community they find themselves in. Many students are already experiencing some form of uncertainty or discomfort as they continue to grow into their personalities and preferred modes of expression but are not offered the language or tools that would help them better understand themselves, others, and nuances of the social world around them. By equipping students with the language, tools, and most importantly, platform to openly discuss these issues with their peers and educators, students are given back the freedom to explore their identity without fear of consequence for straying away from social norms and expectations unfairly placed on them from a young age.

Overview of Gender vs. Sex:

If we look at the physical features that determine sex (anatomical, chromosomal, hormonal, etc.), many cultural and medical practices place people into one of two categories: male or female. These categories are limited, as the exclude intersex individuals. Additionally, sex is not the same as gender; people have their sex assigned at birth and their gender identity, which do not always align. The terms ‘male,’ ‘female,’ and ‘intersex’ are often used to signify sex, while terms like ‘man,’ ‘woman,’ ‘nonbinary,’ and ‘transgender,’ are often used to signify gender. Gender is often described as a socially constructed phenomenon, where these labels are given value and significance based on cultural, societal contexts. While gender, like sex, is often posited as binary with labels of ‘male’ translating to ‘man’, ‘female’ translating to ‘woman’, this overly simplistic. Gender works along a spectrum, where numerous genders (both named and unnamed) that individuals can choose to identify with.

Directions: It is important to start with a brief sketch of the differences between gender and sex at the start of discussion to prevent confusion later in the discussion. A venn diagram can be drawn on the board with the respective sections “gender” and “sex” to be filled in during the discussion. It is important to offer a middle space for students to express confusion or areas of potential overlap, while nonetheless keeping the categories distinct. If students are of a particularly young age group you can start by offering brief, general definitions of each to analyze and dissect together as a class to stimulate students’ thinking. Throughout this conversation take care to point to or emphasize areas they may be overlooking (in terms of similarities or differences). 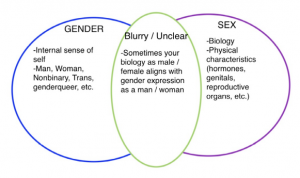 Directions: The central question that will be discussed is: “What does it mean to be identified by other people as “X” gender? Students will explore terms like: Woman/Girl, Boy/Man, Nonbinary, Transgender

Directions: This activity will have students examining different gender stereotypes.

Have Your Class Watch This Video